Veterans Day: Dealing with the Return

Veterans day: A day to remember those who fought. It comes with yellow ribbons, free menu items, a lot of “thank you for your service” mentions. At least in the USA, it does. In the UK, it’s poppies pressed into buttonholes by news’ presenters and laying of wreaths to honor the sacrifices. In Ireland, it’s –like so much of Irish history– a complicated mix of acknowledging those who fought, while also recognizing that Irish men were called up to serve the British Empire right in the midst of renewed hopes for home rule. That war that interrupted millions of lives also paused Irish home rule. It was supposed to be enacted at the beginning of the war, but it was suspended until the end of the war. In a way, it was like the colonists wanting representation and the right to govern themselves during the American Revolution. In fact, in the late 1700s, Ireland did attempt to gain its independence, inspired by the American Revolution and French Revolution. In the midst of war, in 1916, the Easter Uprising forever changed Irish history.

1916 is also the year in which What Edward Heard, my second historical novel, begins.

The ebook cover reflects the beginnings of the book’s setting: Venice. 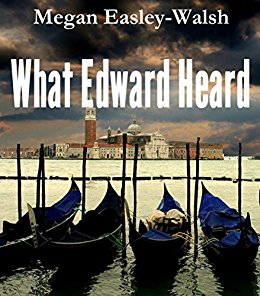 The printed covers, though, depict the silhouette of soldiers. It’s purposeful in that it shows the lingering shadow of war on veterans, especially Edward in this instance. I once heard someone say, “thank you for your service” is the end of a conversation, when it should be the beginning. There are many stages of returning to normal life and grief that accompany the soldier’s journey. That return to normal life, when nothing is normal any longer is part of the story of What Edward Heard. He’s trying to be strong for those around him, while crumbling on the inside. A moment of that is captured in this passage: 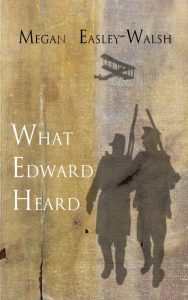 Agnes, haunted by her own ghosts of war, born of her suppositions and worries rather than experience as Edward’s were, attempted to draw him from his solitude whenever possible.
“Let’s go to the pictures,” she had suggested one recent Saturday afternoon. The suggestion caught Edward off guard and no reason to decline was readily forthcoming, so he had no choice but to oblige her. As they sat there side-by-side, newsreels began to flash onto the screen. Music played somberly in accompaniment from the young girl seated at the piano, as Edward sat transfixed by the sterile black and white of war. Many in the audience gasped in horror, but for Edward it was merely a shadow of truth like Plato’s in the allegorical cave. The public had first been exposed to such images this past summer during the earliest weeks of Edward’s own Battle of the Somme.
Agnes reached across to slip her small ivory hand into his larger calloused hand.
“Is that how it is?” she whispered, not wanting to arouse pain but unable to silence her internal screams and pleadings for information on George and John.
No, it’s a hundred thousand times worse. Everything is in color—vital red turned to deathly crimson, blue skies turned to impending gray. No melodic notes accompany the scene, only the piercing cries, agonizing screams, and thunderous explosions. The air does not smell of the delicate rosewater worn by the women around you. It reeks of mud, mold, and putrid flesh. And it’s personal, so painfully heart-wrenchingly personal. They are not strangers; they are the men you eat with, sleep with, fight with. They are James.
The thoughts erupted in his head like molten lava, which had bubbled uneasily to the top, but Edward, stoic and steady, swallowed them all, dismissing them from duty and from reality.
“Yes, it’s like that,” he said, simply.
Agnes’s fingers clenched around his own, as she squeezed his hand, half to comfort him and half to console herself. She reached into her pocket and retrieved a lace-edged handkerchief to dab at her moistening eyes. For her, this version of reality, diluted and cheapened, was difficult enough to bear.

My best to you all,
Megan